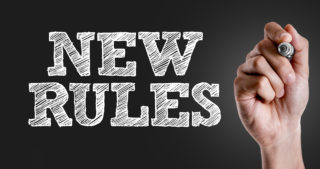 California Code of Civil Procedure § 2031.280 titled Form in which documents to be produced; Form for producing electronically stored information; Translation of data subdivision (a) states as follows:

(a) Any documents produced in response to a demand for inspection,  copying, testing, or sampling shall either be produced as they are kept in  the usual course of business, or be organized and labeled to correspond with the categories in the demand.

(a) Any documents or category of documents produced in response to a demand for inspection, copying, testing, or sampling shall be identified with the specific request number to which the documents respond.

Responding party can no longer produce documents kept in the “usual course of business. “

This change in the law is an attempt to curb discovery abuse. The former law enabled a party to dump thousands of documents in response to a document request with no rhyme or reason as to how they are responsive to a specific request. The demanding party was left with two choices to nail down which document was responsive to which request: (1) propound further written discovery or serve a deposition notice to determine what documents the responding party was relying on to support their case their claim or defense or (2) seek a court order requiring the responding party to label and sort the files to correspond to the categories demanded. See Kayne v. The Grande Holdings Limited (2011) 198 Cal. App. 4th 1476.  Either choice delayed the discovery process by months.