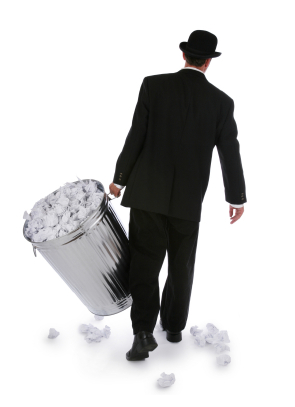 Not only are most objections garbage, we tend to recycle our garbage objections from one case to the next. Sometimes, we pick up other attorneys’ garbage objections and contribute to more litter. This is done over and over again without even thinking what it is doing to the environment of the litigation.

Garbage objections fuel the ire of opposing counsel. The “meet and confer” letter that is soon to follow is usually full of hostility and threats. Any amicable relationship you had hoped for with opposing counsel is on the cusp of being destroyed. More important, you are now costing your client more money in attorneys’ fees and possibly in settlement.  So before you throw out the trash, look at these common objections and why they will be overruled:

General Objections:     C.C.P. §2030.210(a) (pdf) states that “[t]he party to whom interrogatories have been propounded shall respond in writing under oath separately to each interrogatory . . . ” Even though several interrogatories may be objectionable on the same ground they may not be objected to as a group. Hogan and Weber, California Civil Discovery (2d. ed 2009) §518

“Ambiguous”      Valid objection only if the question is totally unintelligible. A party has a duty to answer if “the nature of the information sought is apparent.” Deyo v. Kilbourne (1978) 84 CA 3d 771(pdf), 783. Rather than sustaining the objection, the judge may ask the propounding to rephrase the question or request. See Cembrook v. Superior Court (1961) 56 C2d 423 (pdf), 430   Hint: instead of objecting state what you think the interrogatory is asking then answer.

“Overbroad”     Valid only if the question calls for an undue burden such as “shotgun” interrogatories” as they are too general (i.e., “Please state the identity of each and every person who has knowledge of the relevant facts of the litigation.”)  See CEB, California Civil Discovery Practice (4th ed. 2009) §7.85

“Burdensome and Oppressive”  The showing required to sustain this objection is that the intent of  the party was to create an unreasonable burden, or that burden created does not weigh equally with what requesting party is trying to obtain from it. See Mead Reinsurance Co. v. Superior Court (1986) CA3d 313 (pdf). In the Mead case, the objecting party showed that it would require the review of over 13,000 claims files requiring five claims adjusters working full time for six weeks.

Referencing Documents:    The “see complaint” type  answer is not proper.  If the question requires reference to some other document, then the document should be identified and its contents summarized so that the answer by itself is fully responsive to the interrogatory. Weil and Brown Civil Procedure Before Trial (TRG 2009) §8:1049 citing Deyo v. Kilbourne (1978) 84 CA 3d 771(pdf). The exception to this is C.C.P. §2030.230 (pdf) where the code allows the answering party to allow the interrogating party to inspect the files and records. However, the answering party must show: (1) a compilation, abstract, audit or summary of its records is necessary in order to answer the interrogatory; and (2) no such compilation etc. exists; and (3) the burden or expense of preparing or making it would be substantially the same for the asking party as it would for the answering party.